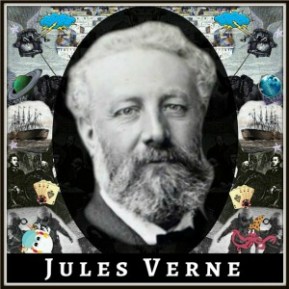 Jules Gabriel Verne was a 19th century French author best known for stories like Twenty Thousand Leagues Under the Sea, Journey to the Center of the Earth, Five Weeks in a Balloon, and Around the World in Eighty Days.

He’s often referred to as the “father of the science-fiction genre” but Jules Verne himself would disagree with that term and say that he was a writer of science-possible or soon-to-be-science facts.

He put a lot of research into all his novels and based them on laws of physics known during his time. Verne believed his inventions and discoveries were not exactly impossible using contemporary engineering skills and knowledge.

Some of the inventions he created in his books and later came true are: the submarine, the helicopter, video conferencing, the hologram, solar sails, and lunar modules.

In Jules Verne’s eyes, a science-fiction writer was someone like H.G. Wells, who talked about invisible men and time travel. For Verne, those creations belonged “unreservedly to an age and degree of scientific knowledge far removed from the present, though [that’s] not to say entirely beyond the limits of the possible.”

To make the difference between H.G. Wells and himself even more clear, Jules Verne once told one of his interviewers: “Wells’s characters go to Mars in an airship made of a metal which defies gravity.” Then, almost as a challenge, he added, “But show me this metal. Let him produce it.”

Science-fiction writer or not, Jules Verne is still one of the most read and best loved authors in the world. He’s also the second most translated author in the world, behind Agatha Christie and ahead of William Shakespeare.

As a young boy, Verne loved studying Latin, Greek, geology, and geography. He was also a good reader and spent countless hours enjoying the works of James Fenimore Cooper, Sir Walter Scott, Charles Dickens, Victor Hugo, Daniel Defoe and Johann Wyss. Those authors appealed to his love for travel and adventure, and influenced his own writing.

Shortly after, Jules Verne’s long time publisher died. His mother passed away the following year. That darker period caused Verne’s turn to pessimism both in his writing and in his outlook on how science could affect humanity. Later works talk about the destructive potential of technology, the plight of orphans, the corrupting power of missionaries in foreign lands, the extinction of animal species, and the ravaging effects the oil industry had on the environment.

During that time, Verne continued to indulge his love for travel and he was elected to the municipal council of Amiens, France, a position he held for fifteen years.

He left behind a drawer filled with manuscripts of works in progress. Some of the novels he had been working on but never finished were later changed and published by his son.

The statue placed on Jules Verne’s grave, “Towards Immortality and Eternal Youth”, was designed by sculptor Albert Roze and it shows the shrouded figure of Verne breaking his tombstone and emerging from the grave. 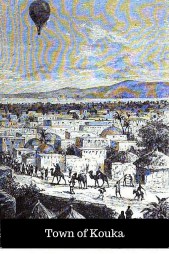 Five Weeks in a Balloon is the story of three Englishmen who try crossing the unforgiving African continent in a hydrogen balloon, at a time when Africa was not fully known and many expeditions had ended with the deaths of their explorers.

The main characters, English scholar Dr. Samuel Ferguson, his faithful manservant Joe, and his friend, professional hunter Richard Kennedy, go on a 4,000 mile balloon trip and through a series of adventures while first trying to discover the source of the Nile and then return safely back to England.

Five Weeks in a Balloon was Jules Verne’s first published novel, a big success with readers, and a taste of his writing style which combined humor, quirky characters, exciting inventions, suspense and travel to make for a fun, engaging read.

Journey to the Center of the Earth tells the story of German geology professor Otto Lidenbrock, his overcautious and adventure-reluctant nephew Axel, and their guide, Hans Bjelke, an eiderdown hunter, who go to an extinct volcano in Iceland and travel to the center of the Earth through volcanic tubes.

“Descend into the crater of Yocul of Sneffels which the shade of Scartaris caresses before the kalends of July audacious traveler and you will reach the center of the earth. I did it. –  Arne Saknussemm”

Professor Lindenbrock and his nephew set out for Iceland at once, despite the latter’s protest, and start a journey in which they discover prehistoric lands and creatures, battle powerful natural disasters, and try to find their way back home. 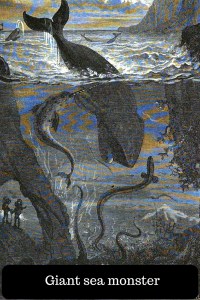 Twenty Thousand Leagues Under the Sea brings us the story of the mysterious and polarizing Captain Nemo – is he a hero? a villain? a bit of both? – as told by French marine biologist Professor Pierre Aronnax.

In 1866 the world’s seas were plagued by a giant monster. Professor Aronnax, his devoted servant Conseil, and Canadian whaler and master harpoonist Ned Land embark on the United States Navy frigate Abraham Lincoln as part of an expedition organized by the United States government to hunt down and destroy the monster.

The three characters soon discover that the feared sea creature is in fact a large submarine, Nautilus, built using technology far ahead of its time. Professor Aronnax and his companions become captives of Captain Nemo, the submarine’s commander, and start an undersea journey in which they battle giant squids, explore the incredible beauty of the oceans’ landscape and life forms, and even visit the legendary lost city of Atlantis.

Many readers are surprised to learn that the title of the story refers to the distance travelled through the Earth’s seas and oceans, and not the depth – twenty thousand metric leagues represent more than six times the diameter of the Earth.

Despite its rushed ending and some unresolved questions, Twenty Thousand Leagues Under the Sea remains one of Jules Verne’s best loved books. 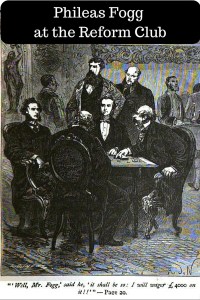 Around the World in Eighty Days is a race against time. During a card game with his friends, the proper, unflappable English gentleman Phileas Fogg makes an uncharacteristic bet that he could tour the Earth in eighty days. Half of his wealth goes towards the bet and the other half is set aside to cover the costs of the journey.

One hour and twenty minutes after the card game is over, Phileas Fogg leaves London with his flabbergasted, hot-blooded, disorganized French valet, Passepartout.

Passepartout had been hired just earlier that day to replace Fogg’s former valet who had been dismissed for bringing Fogg’s shaving water at 84 F (29 C) instead of 86 F (39 C). This tidbit gives a clear insight into Fogg’s obsession with routine which makes for a fun element throughout the book.

Phileas Fogg and Passepartout use virtually every form of transportation available during those times – train, steamships, sailing boats, elephant rides – to overcome kidnappings, storms and Sioux attacks, save an Indian princess, dodge a misguided Scotland Yard inspector who believes Fogg to be a bank robber, and try make it back to London in eighty days.

Here’s some trivia about Around the World in Eighty Days:

Of Jules Verne’s many books, Around the World in Eighty Days is the furthest from science fiction. It is better described as an adventure story with memorable characters and fast paced action. A classic. 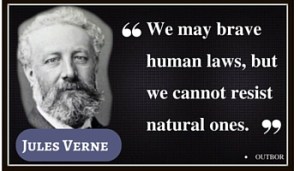 “Science, my lad, is made up of mistakes, but they are mistakes which it is useful to make, because they lead little by little to the truth.”

“The sea is everything. […] Its breath is pure and healthy. It is an immense desert, where man is never lonely, for he feels life stirring on all sides. The sea is only the embodiment of a supernatural and wonderful existence. It is nothing but love and emotion. It is the ‘Living Infinite’.”

“If there were no thunder, men would have little fear of lightning.”

“There are no impossible obstacles; there are just stronger and weaker wills, that’s all!”

“Is the Master out of his mind?’ she asked me.
I nodded.
‘And he’s taking you with him?’
I nodded again.
‘Where?’ she asked.
I pointed towards the centre of the earth.
‘Into the cellar?’ exclaimed the old servant.
‘No,’ I said, ‘farther down than that.” 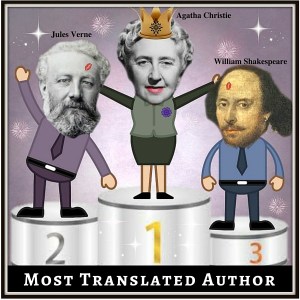