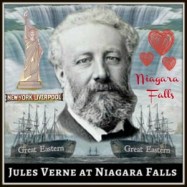 In 1867, thirty-nine year old Jules Verne and his younger brother travelled from Liverpool to New York aboard British steamship The Great Eastern.

According to his friend,  Adrien Marx, “on reaching New York, Jules Verne did not saunter about Broadway, looking in shop-windows, but took the railway and went six hundred leagues to see Niagara Falls.” The sight was impressive. Even ten years later, Jules Verne  could not “yet speak of it it without emotion.”

That trip was also an inspiration for Verne’s adventure novel A Floating City. 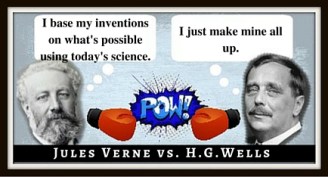 Jules Verne is often referred to as the “father of science-fiction.” So is H.G. Wells, the British author famous for works like The Time Machine and The Invisible Man.

Jules Verne took pride in his extensive research and his ability to base his inventions on what he considered to be possible with the technology of his time.

This is what he had to say in two of his interviews when asked about H.G. Wells*:

H.G. Wells was not concerned with what was possible in his days. His imagination traveled much further than that. In his eyes, imagining rather than using actual scientific facts was the more difficult art.  In an introduction to his own short stories, he wrote*:

“There is no literary resemblance whatever between my work and Jules Verne’s. Whereas Verne deals almost always with actual possibilities of invention and discovery, my own intention is to hold the reader to the end by art and illusion, and not by proof and argument.”

Jules Verne and His Readers 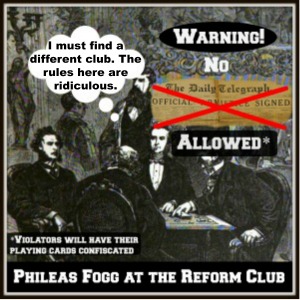 From Adrien Marx, Jules Verne’s friend, comes another story about the French author. This time Jules Verne is scolded by one his readers for writing that Phileas Fogg had been reading The Daily Telegraph at the Reform Club on the evening of his wager.

Here is the anecdote as told in the Introduction to Around the World in Eighty Days, the 1876 edition.

Verne receives letters, in which his correspondents give him their impressions and ideas, and sometimes foolish observations, from all parts of the world. Those who have read “Around the World in Eighty Days” recall, no doubt, that Phileas Fogg, its hero, undertook his journey after reading an article in The Daily Telegraph at the Reform Club. The other day Verne received a letter from a member of that famous club, in which he said, somewhat bluntly, that the political tone of  The Daily Telegraph excluded that sheet from the Reform.

“It is as if you should say that M. de Belcastel subscribed for the Republique Francaise!” added this pert correspondent.

Verne laughed heartily at the illustration, and, as he is amiability itself, apprised the member of the club that in the next edition of the book he would substitute for the obnoxious sheet one admitted into the club to which the famous Phileas Fogg belonged; and, as the editions are rapidly succeeding each other, the discontented gentleman will doubtless ere long be fully satisfied.

~ Adrien Marx, Introduction to Around the World in Eighty Days (1876) 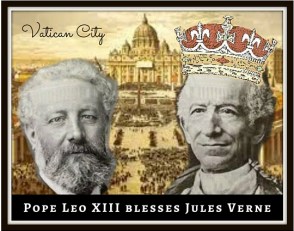 There are no clear indications that Jules Verne was a devout Catholic. In fact, some of his letters and fiction point to the fact that he was a deist. Even so, in 1884, Verne travelled to Italy and met Pope Leo XIII. Apparently, both men had respect and admiration for each other.

By some accounts, Jules Verne was moved to tears during their private audience and declared himself “a believer.”

Pope Leo XIII, a fan of Verne’s writing, commended him for his moral idealism and blessed his work, making Jules Verne the first (and only?) author to be blessed for writing science fiction.